Hope Deferred is not Hope Denied

Hope Deferred is not Hope Denied

If you were to take a walk down the streets and meet with Jacqueline Wanjiru, she looks like any other carefree young adult in her 20s. But, sit down with her for just a while and you soon realise nothing could be further from the truth.

It is a relatively warm day when we set-out to meet with Jacqueline in her home at Mathare’s Village One. She lives in a small, one-roomed tin house with her three young daughters, two of whom are students at MOHI’s Pangani center. 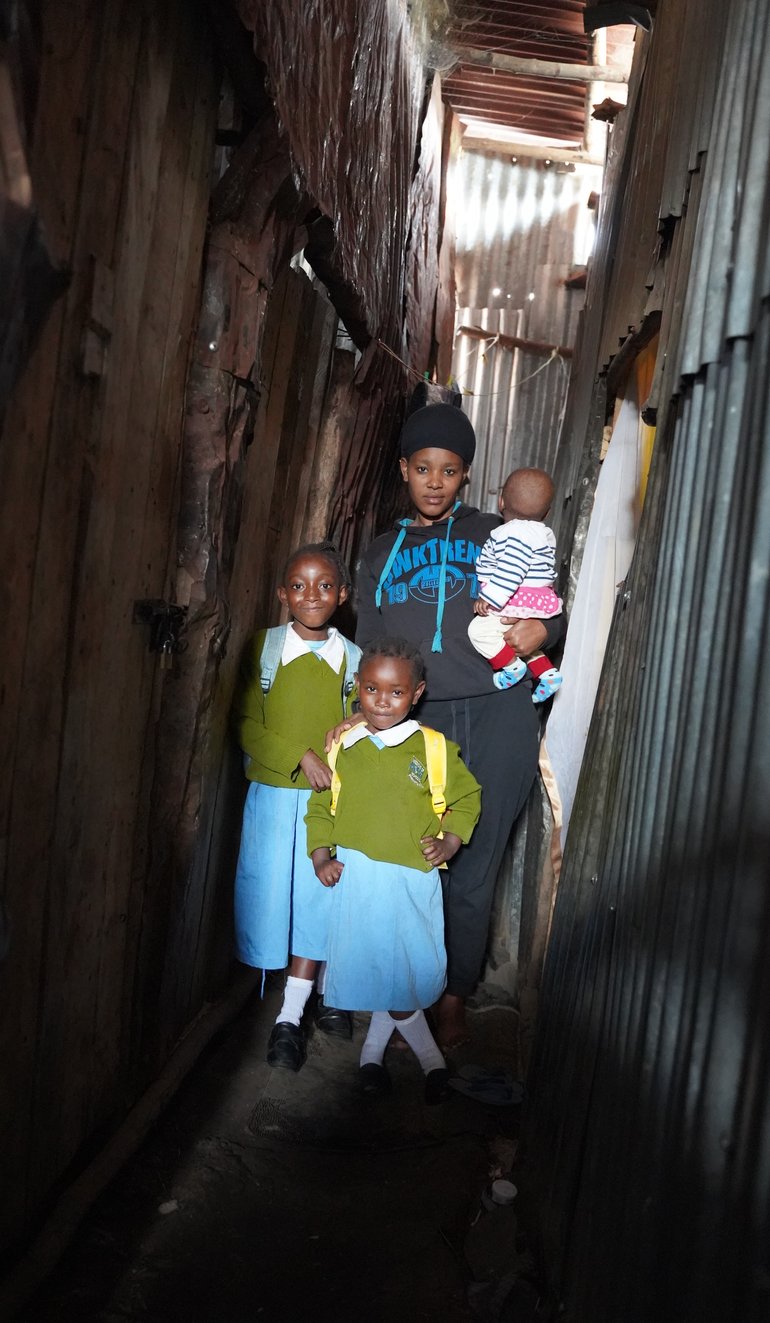 After a short walk through the slum’s narrow alleys, we are soon at her door. The 26-year-old receives us warmly, immediately setting us at ease and willingly narrating her story to us.

She tells us April 2018 is when things went bad for her after a disagreement with her husband saw her kicked out of her marital home.

“My mother died a long time ago and I have an aunt who has been like a mother to me,” Jacqueline explains - her expression glum and her tone sorrowful. “My aunt has been unwell for a while and I had not been able to visit her because my husband would not let me. We would get into an argument each time I expressed my desire to see her and I would postpone the visit.”

We are getting into the thick of things when our interview is briefly cut short as Jacqueline’s daughters, eight-year-old Zulekha and five-year-old Shariffa, walk into the house.

The two MOHI social workers, who had accompanied us, ask why the children are not in school and Jacqueline informs them that she was not feeling well so was not able to take them. We offer to escort the children to school on our way back to the office and the young girls get very excited at the prospect of going to school.

As they go behind the curtain, partitioning the one-roomed house, to change; Jacqueline picks up where we left our conversation.

“When I got to my aunt’s home,” she continues, “I found she had really deteriorated. I could not leave her on her own and I opted to spend the night. When I communicated this to my husband, he told me to stay where I was and not come back home. I thought he was speaking out of anger but when I called him again the next day, his response was the same. He wanted nothing to do with me or his children.”

Jacqueline tells us that living with her aunt was out of the question and that her husband’s decision effectively left her and her two children stranded. Luckily, a neighbour to her aunt agreed to take her in and for the next two months, this became their home. A few weeks later, Jacqueline discovered she was pregnant with her third-born child.

“This came as a shock to me and I immediately called my husband to inform him,” she recounts. “I might as well not have wasted my time because he told me in no uncertain terms that he was not interested. My children and I were dead to him. He had moved on.”

Shariffa comes back from behind the curtain and I watch as Jacqueline absentmindedly tugs at her daughter’s uniform to straighten it.

She asks her girls to bring their shoes and starts to polish them – her eyes remaining downcast. 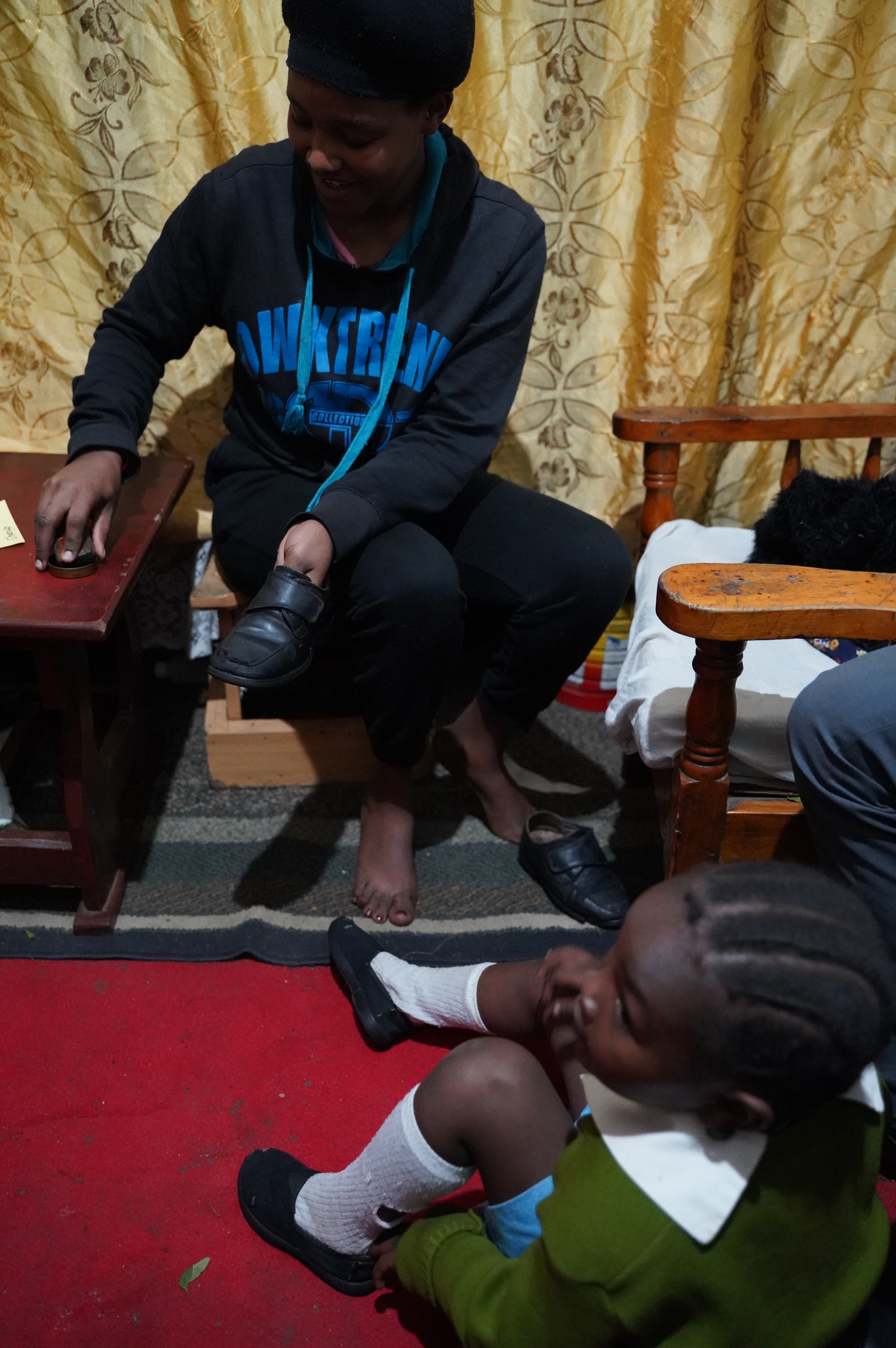 It is obvious that this line of questioning is painful for her to talk about and I allow her to be for a few minutes.

Our cameraman takes a few shots of the smiling girls and as I watch Jacqueline looking at her daughters, I gently draw her back to our conversation.

She looks at me, a dejected look in her eyes, and says as though it was not bad enough to be rejected by the father of her children, the lady who had given them residence gave them notice to vacate.

“We had stayed with her for two months and then one day she told me that she would be moving out of the area and would no longer be able to house us. My children and I were once again rendered homeless. I did not know what to do.”

Jacqueline opted to approach a friendly, elderly neighbour lady who agreed to host her. The only catch was that they had to share the house, a single-room, with her 23-year-old son. “For the first couple of weeks, he would leave the room for us and seek shelter elsewhere," she tells me. “But he soon got fed up of this arrangement.”

He moved in and the two started living like husband and wife; an arrangement that did not sit well, and still does not sit well, with Jacqueline.

“I don’t like this,” she tells me, a scowl on her face, “but what do I do? I have no way to help my children. Because of being pregnant and breastfeeding my third-born, I have not been able to find work I can do. I have been forced to rely on well wishers.”

The girls, who are now dressed and ready for school, come back into the room. They smile and pose for the camera, their faces bright and shiny – a complete contrast from their mother who sits with a forlorn look on her face.

One of the social workers asks Jacqueline if she is willing to work.

“My baby is now 5-months-old. She is old enough to leave with a caretaker and finding one would not be difficult. I am willing to work,” she says.

I steer the conversation back to our interview and ask Jacqueline how she met our social workers.

“Because of our situation, the girls had been out of school for a long time and had taken to roaming the slums and playing in the dirt.” she says.

“One day, I was at home doing my chores when I saw Shariffa walk-in then heard a knock on my door. Two strangers walked in and after they introduced themselves, they told me my daughter had begged them to come meet their mother so that she and her sister can start going to school. I was amazed at my young daughter’s courage and audacity. This encounter set the stage for what I have come to see as God’s intervention.”

She tells me after this initial meeting, the social workers took steps to see that the young girls secured a spot at our Pangani centre. Everything was on course but they soon ran into a hurdle. Jacqueline did not have her daughters’ birth certificates.

“When I left my matrimonial home, I left with nothing but the clothes on my back. So, when I was denied access to my home, it meant that everything I once owned and all our documents were left with my husband,” she explains.

“When I called to ask him for his children’s birth certificates he rudely told me off and all my subsequent pleas fell on deaf ears. It seemed like all was lost, like my children would not go to school,” she says with a faraway expression as if still relieving that moment. “But by some miracle,” she continues, “he eventually sent us a photocopy of the documents although only one week was left of the school term.”

The girls went to class for that one week before joining their fellow students for the November-December recess then resumed their learning in January.

I ask Jacqueline what her thoughts for the future are and she takes a few minutes to respond. I see tears well-up in her eyes.

“Sometimes when I look at my children and think about my life, I wonder what is going to become of us; what is our future going to look like, how are we going to live,” she says as the tears roll down her face.

We sit for a few seconds and let the sobriety of the moment sink in as our cameraman clicks away and Jacqueline’s children strap-on their backpacks; ready to leave for school. I see her pull herself together and wiping her tears away she says: “It is true I have so many unanswered questions but, I also do have cause to be thankful.”

With a barely visible smile she continues: “Seeing my children happy as they go to school and performing very well in their academics is a blessing. Knowing that, while in school, they will at least benefit from two nutritious meals gives me peace of mind. Seeing them clean and tidy makes me proud. I also have people to talk to, the MOHI social workers are a support system for me - I am no longer alone. And they have taught me a lot about the love of God. I know He is with me and He is watching over us. I do have cause to give thanks,” she says - her face visibly brightening up.

This sounds like a good place to wrap things up so we say our goodbyes and usher the girls out to take them to school.

As I watch our cameraman take a few more shots of the family, I think how Jacqueline’s story is like that of so many other young mothers living in Mathare. Tales of young women who feel downtrodden but have not given up.

Jacqueline is willing to learn a skill, to find work, to do all it takes so she can take care of her three girls. Now a born-again believer, her current cohabiting is causing her untold grief and she wants to live alone with her children. Pray with us as we continue to work with Jacqueline and her family.