John Kiritu joined MOHI in 2008 as a grade six student. He was in Pangani for the first two months before moving to Joska where he did his grade eight exams in 2010.

John grew up in the Kosovo area of the Mathare Valley slum and together with his two sisters and one brother (who has since passed away), they were raised by their single mother. He is the last born hence the reason he is the only one - among his siblings - who joined the MOHI program.

“Mum learned about MOHI from one of our neighbors and she decided to check it out,” he says. “She was really struggling to keep me in school due to lack of money to pay for my education. I would constantly be chased home for lack of school fees.”

It was therefore a double blessing for the family when John was moved to the boarding program. Not only did he not have to worry about his school requirements, he was in an environment that enabled him to concentrate on his studies. John also remembers that he was a sickly child at this time of his life and being in MOHI was a great help.

“I remember how well the health team looked after me. When I needed specialist care, I would be driven from Joska to a specialist hospital some two and a half hours away so that I could receive the treatment I needed,” he said. “This was done at no cost to my mother. She had the dates for when I would be making these hospital visits and many times, she did not even need to accompany me. The health team took care of me.”

The other thing that John remembers about being in Joska is that it is where he made a decision for Christ. John had been raised as a Catholic, but in his interactions with boys in the community before coming to MOHI, he became attracted to the Muslim faith for the benefits it afforded him, like receiving free food. He, however, did not study the faith in-depth and rather only chose to affiliate himself with it. 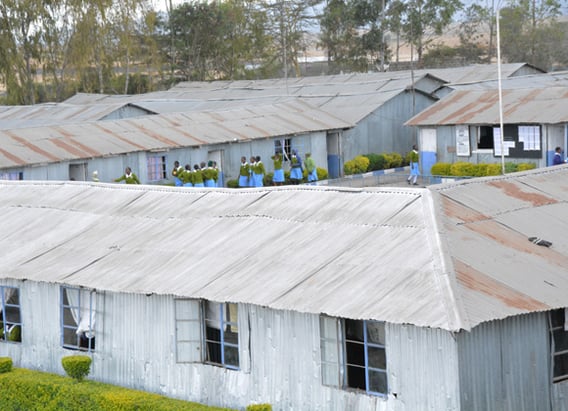 So, when the 14-year-old joined the MOHI program, he did so as a self-confessed Muslim. However, once he started being exposed to the various spiritual programs at Joska, it reminded him of the teachings he had been taught as a child and he started to reconsider his acquired faith.

“Reading the Word of God, memorizing and internalizing Scripture reminded me of stories I had heard as a child and exposed me to truths that I could not ignore about Jesus. I gave my life to Christ as a grade eight student and this helped to shape the person I became in my later years,” he says.

From Joska, John went to high school on a full MOHI scholarship. It was a dream come true for John who says he did not really expect anything to come out of his working hard in primary school.

“My mother used to do odd jobs in order to provide for us. While she was really hard working, her earnings were meager and I, therefore, did not expect that she would be able to pay for me to advance my education,” he says. “I was a bright student who worked hard at school and got good grades and because of this, I was mocked by some of my neighbors. They said working hard would take me nowhere. I thank God because He used MOHI to change that narrative.”

Although excited to be in high school, John says it took him a while to settle down. He was sick when sitting for his grade eight exit exams and so he did not get the grades he expected and as a result, did not get to go to the school of his choice.

As a grade nine student, John’s grades started to drop and he was entertaining the thought of dropping out of school. He was convinced that he could only pass his grade 12 exams at his preferred school. Thank God that MOHI social workers had not stopped looking out for him. When this trend was observed, a meeting was called to nip this thought process in the bud.

“I was summoned to MOHI and a committee sat me down. My mother was also in attendance,” John says. “They told me that passing exams is dependent more on individual effort than on a school’s reputation for good grades. They encouraged me to accept the school I was in and then challenged me to apply myself and see what my final grade would be.”

John took on the challenge and spent the next four years focused on his studies. His efforts paid off as he graduated from high school with an A- grade of 75 points out of a possible 81 points. His good performance earned him direct entry into university and he joined the University of Eldoret in 2014 to pursue a BA in Economics degree. Once again, MOHI stepped in to support him using the Higher Education Fund.

Joining university was a big deal for this boy born and raised in the slums. John says it caught the attention of his community members and even those who once said he was wasting his time studying now supported him fully. Everything was good in the world for John until his mother passed away in 2016, just as he was about to sit for the exams that would usher him to his second year of university. 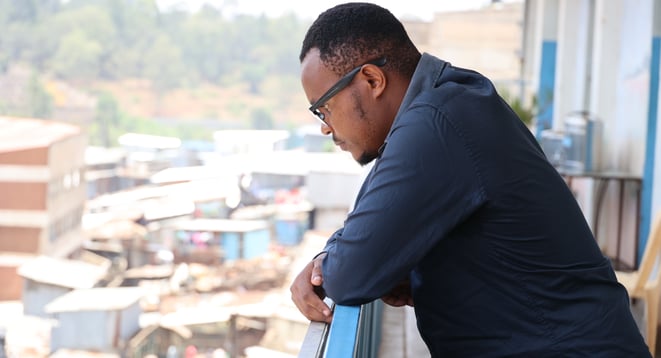 “I remember being in the exam room ready to take the exam. I had read and prepared for this paper but when I looked at the questionnaire, my mind was completely blank. It was like reading Latin. I picked up my bag, gave the paper back to the invigilator, and walked straight to the Dean’s office. I told him what was going on with me and he allowed me to defer my studies.”

John says he took the next bus home and made the six-hour trip back to Nairobi. He stayed in the house he had shared with his mother and went into a very dark place. At the time he felt very far from God and he joined up with the wrong company, drinking and experimenting with drugs. To sustain his new lifestyle, he became an untrained teacher and taught in neighboring high schools.

During this time, his mother’s sister had been able to go to the US and thinking that he was still in school, she used to send him pocket money. John says nobody in his family knew that he had not been in school for at least 18 months and he was not sure when or if he would return.

“I was in a very dark place and to my surprise, it was the very people who I was keeping company with that pulled me out. They started telling me not to waste my life. They would tell me that I had an opportunity that many in the slums did not have. They told me I did not belong in the drug dens with them and that I should go back to school.

It hit home when one young man from the community told me that I had always been his role model. That I had made him believe he could use education to leave the slums and that he was so disappointed to see what I had become. It was this that opened my eyes and I knew I had to finish school - not just for me but for the sake of the people in my community,” he said.

The first order of business was to come clean with his family. John says his auntie was really angry with him for duping her and taking her hard-earned money. She, however, did not give up on him and instead got him a counselor and said she was going to give him just one more chance.

“I ended up having six sessions with the counselor and it was there I realized what had caused my hopelessness. My mother was the reason why I did everything I did. Why I worked so hard in school, why I stayed clean - away from all drugs. I wanted to uplift her, remove her from the slums and give her a better life. When she died, I no longer had a reason to work hard or to want better for myself. It is like my dreams died with her,” John says.

John says counseling helped him to find a new purpose and a new vision. He says it made him want to achieve his dreams for himself and also to offer hope to his community. John then made peace with God and set out on a path to turn his life around; he stopped drinking and slowly withdrew from cigarette smoking and taking other drugs.

He also opened up to MOHI CEO Pastor Wallace who listened to him and encouraged him to return to school. MOHI never stopped funding his education. He went back to school in October of 2018 and he has never looked back. He graduated this March with a second-class upper BA degree in Economics.

John is now an intern at the Microfinance department based in MOHI’s Kariobangi center. He started his internship in January this year after a successful three-month attachment period that ended in December last year. 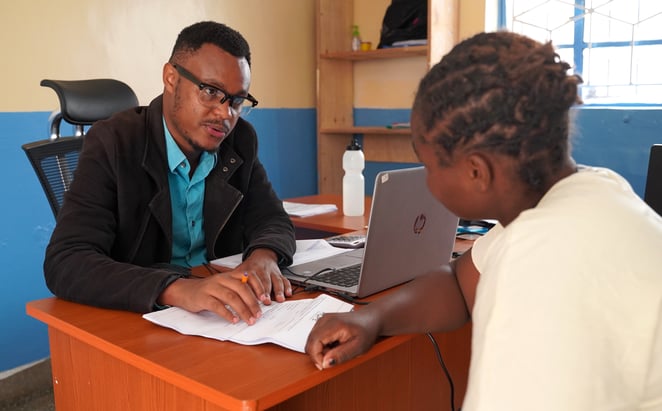 Looking back at the journey he has made, John is thankful for the multifaceted role that MOHI has played in his life. Starting with the high-quality education offered at MOHI and the fact that he never had to worry about not being in class due to lack of school fees or lack of any essential school supplies. It is these factors that he credits as being the springboard for all his academic successes.

“I have always been a bright student but there is no way I would have gotten the grades I got in Joska if I had stayed at my former primary school. The learning environment there was very wanting and I thank God for MOHI because they gave me tools, encouragement, and the opportunity I needed to excel in my studies. They also always ensured that I had everything I needed to stay in school at all levels of my education,” he says.

John says MOHI also played a key role in shaping his character. Through the spiritual and mentorship programs, he says he had a clear understanding of good and bad. He also got skills in handling peer pressure which helped him avoid many of the vices his neighbors adopted at a very young age.  John remembers how Pastor Wallace would go to Joska every Wednesday to offer mentorship sessions. How he would go with other mentors and together they would tackle real-life problems to prepare them for life outside school.

“This knowledge has stayed with me to date,” he says. “Even when I lost all hope and started to take drugs, there was a loud voice inside me that always reminded me that I was better than this. That I was made for more. I knew what I was doing was wrong. I couldn’t get away from the lessons I learned as a young teenager in Joska,” he says.

John can now look forward to a bright future where he too will impact the lives of others just as MOHI did for him. As we celebrate the success that is John’s life, we know it is only possible by the grace of God and through effective partnership. So thank you for your unwavering support. It makes all the difference. 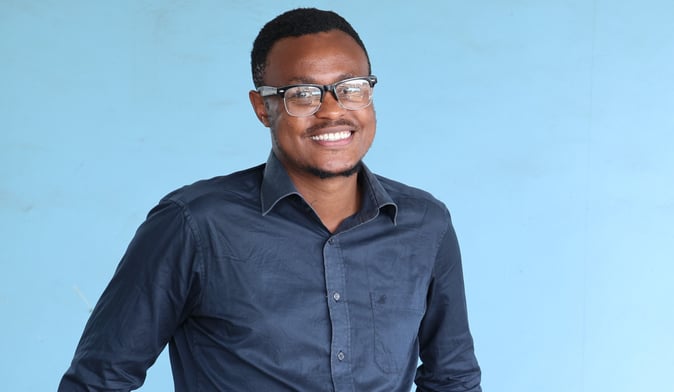