As the 2016 academic year begins at Missions of Hope International (MOHI), we celebrate with our students who passed their national exams for admission to high school. Of the 414 students who completed the exam at the end of last year, 78% passed with high marks, earning a guaranteed spot in high school. Moreover, an additional 72 students scored sufficient marks to apply for high school admission. Therefore, 95.6% of the MOHI students who took the exam can now attend high school!

Each year, all eighth-grade students in Kenya must take a national exam to receive a certificate of completion for primary education. Scores earned on the exam determine ranking and streams for secondary education. If a student fails to achieve a specified minimum score, he or she is not eligible for admission to high school.

Joska student Melvin Isenya earned the highest score on the exam, 397 points out of 500 total points. This score qualifies her to attend a first-tier high school in Nairobi. She plans to attend one of the most prestigious girls high schools in Nairobi. After high school, she wants to study at university to become a doctor. 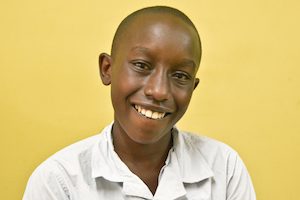 Joseph Mburu Mwangi was the student from Mathare North who earned a score of 392. He wants to be an engineer.