A story of faith: Harmony in the midst of turmoil

A story of faith: Harmony in the midst of turmoil 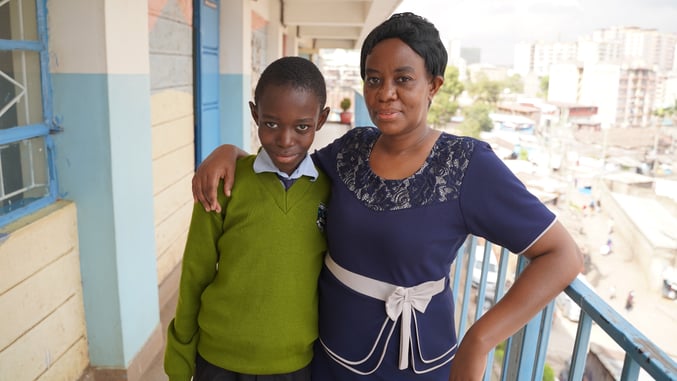 In 2009, Florence Wangui ushered her first child into the world. A son, that Florence and her husband named Harmony.

She’d had a normal pregnancy, had gone for all the ante-natal clinics without fail and had a normal delivery. Holding her son at the end of this journey was an answered prayer for this young couple. And true to the name they had given their son, Harmony was a peaceful child.

“He had a good appetite and met all his milestones without a problem,” Florence said. “I really enjoyed my time with him. I, however, noticed that he was quieter than most babies. Even when his agemates engaged in baby talk, my son would not say anything.”

Harmony remained quiet for a long period of time and at some point, his parents took him for testing. Florence says the doctors assured them that there was nothing wrong with their son and they were encouraged to keep talking to him.

“While Harmony did not utter a word, he understood every instruction we gave him,” Florence says. “I would give him simple chores around the house and he would do as told. The only challenge was because he could not express himself, he often got frustrated and when he got angry - he would become violent.”

As Harmony continued to grow and became more steady on his feet, Florence noticed that her son could not sit still. He appeared to have limitless energy and was always up and about in the house.

“Harmony was the kind of child you could not turn your back on even for a minute. He would climb, he would roll, when he got the chance to venture outside the house, he would run and I had to ask passersby to catch him and hold him for me,” she says. “I would hold his hand to try and restrain him, wherever we were, and the effort was simply exerting! I would often break into a sweat.”

Yet despite all these challenges, Florence thought nothing was wrong with her boy. As a first-time mum, she thought this is how every other child behaved and assumed Harmony was just dealing with speech delay and excessive playfulness.

When he turned four, Florence brought Harmony to MOHI’s Pangani center for enrolment as a kindergarten student. At the interview, Harmony could not sit still, and his grunts and frustration at being unable to communicate caught the attention of the social workers. They called in the special needs team for assistance.

“It was that day when I brought my son to Missions of Hope International (MOHI) that I discovered my son had a problem,” Florence says. “Led by Isabella, the MOHI team told me that what I thought was excessive playfulness was actually known as hyperactivity.  They also told me that hyperactivity, speech delay and Harmony’s inability to reign in his emotions were most likely indicative of a condition they called Autism. They then referred him to Kenya Institute of Special Education (KISE) for specialized assessment.” 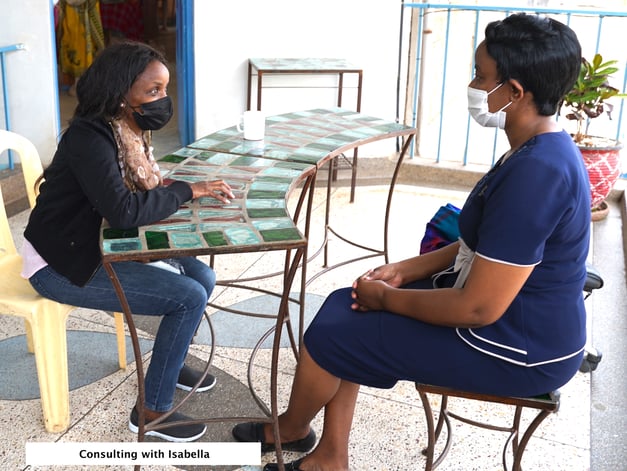 At KISE, Florence says the specialists confirmed the autism diagnosis and they determined that Harmony did not need to attend a special school.  They then sent her to Kenya’s largest referral hospital for even more specialized care. Here Harmony received an initial consultation and Florence was given a form to fill detailing her son’s behavior over a period of time.

“When I went back for the scheduled appointment, Harmony and I walked into the room and found 11 doctors waiting for us,” Florence says. “Their presence startled me but they put me at ease saying they were all doctors from different specializations. This ended up being an intensive consultation as the doctors observed Harmony, gave him tasks, talked to me, looked at the form I had brought. In the end, they too agreed with the specialists from KISE. They told me our son did not need any medication and that he could go to a normal school. The only thing they asked me to change was the diet I was feeding him. I was given a lot of information on how to move forward with my child.

The one thing that hit me really hard,” she continues, “is when I was told that autism has no cure. I looked at my child who could hardly sit still or have a normal conversation and I could not believe that this is all there was to look forward to. It really hit home”.

Florence says the stigma from society was especially hard to bear. Her family, friends, and neighbors would give her all kinds of unsolicited advice on how to help her boy. They were those who openly mocked the couple, some said they were cursed and Harmony was shunned by many.

She says they drew a lot of strength from the support offered to them by the special needs team from MOHI who would make regular home visits. Harmony was also well received at the school and this strengthened the couple’s resolve not to keep their son hidden.

“My husband and I would go everywhere with him. Many times people would stare but we did not let this affect us,” she says. “I really thank God for his kindergarten teacher at MOHI who took Harmony up like her own child. Teacher Jane was a God-sent to us. She loved our son and did not give up on him. Even when he would disrupt the class, there was never a day Harmony was kicked out of class. I really thank MOHI for doing this for us. Not many schools would have agreed to keep him in school”. 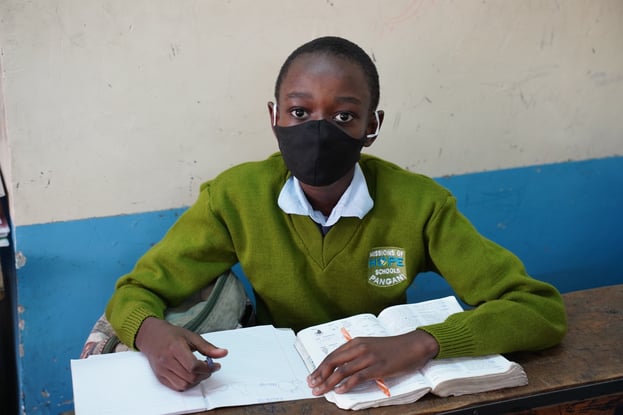 Florence says the turnaround in caring for her boy came one day when it finally hit her: “If there is no cure for autism, then this is a God-thing! And a God-thing can only be handled through faith.” Florence says she henceforth chose to start speaking life into her son’s life.

“He still could not speak, but I knew he could hear. I would sit with my son on my lap and whisper Scripture into his ears and he would burst out laughing. My son, who was unable to express himself, would laugh when the Word of God was spoken to him. When he was sleeping and he was calm, I would whisper into his ears: ‘You are made in the image of God and God speaks, so you shall speak. God is calm, He is not hyper, so you too shall be calm’. I spoke these words over and over and I believed them,” she says.

At school during devotion, the teacher would read Scripture, tell Bible stories, and sing songs. Harmony would be perfectly still at this time, listening intently. Florence says she soon discovered that her son loved worship music. He would stop doing whatever he was doing whenever he heard a worship song and he would put his ear to the radio to hear better.

Then, when he was five years old, a miracle happened!

“We were at home when I heard Harmony whisper something,” Florence says. “At first, I thought I was dreaming. Then I heard him again. When I moved closer, I realized that he was reciting Scripture. The first words out of our son’s mouth were the Word of God! I could not contain my joy. I took a video of him and sent it to his teacher and we rejoiced together - the entire team at MOHI was as excited as we were! All those days of speaking the Word of God into his ears were not in vain!!”

Harmony continued with his studies and he was doing really well. He was still disruptive in class. He would still throw things and would not sit still, yet when an exam was brought, he would be done in minutes and he would get everything correct. Florence is convinced that God protected her son so that he did not destroy anyone’s property or injure himself.

Interestingly though, while Harmony was disruptive, he was very careful around his younger sister and was the perfect babysitter.

“Our daughter was born when Harmony was about two and a half years old and right from the beginning, we noticed that he was very gentle with her,” Florence says. “He would look out for her and I would often leave him watching the baby as I made a dash to the shop for an item or two. They developed a very close friendship and as our daughter grew older, she in turn became very protective of her older brother”.

When Harmony was about eight years old, another major miracle happened; the hyperactivity just disappeared. Florence says her son went from being all over the place, disruptive and unable to sit still to being completely calm, able to stay focused on what he is doing.

“There is no logical explanation for this,” she says. “I believe God by His mercy just healed him. Today Harmony is like any other grade six child. He is friendly and interacts well with others. He still has a challenge expressing himself fully but this has not impacted his academic performance - he is doing well in school. The child people said will never amount to anything is well on his way to prove them all wrong. Truly ours is a story of faith and an indication of what trusting fully in God can do”. 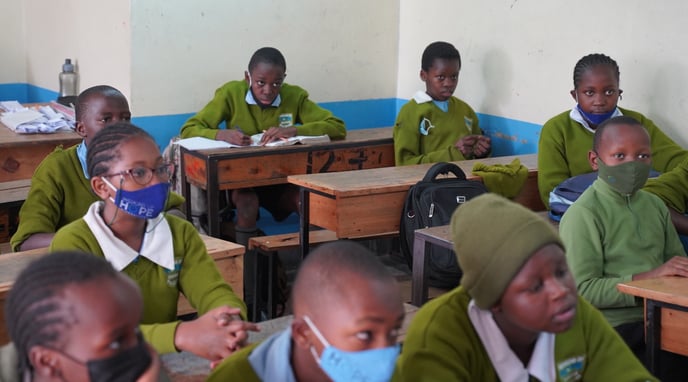 Florence tells me her journey with Harmony has made her very passionate about children with special needs. Her plea to parents with such children is: “Do not hide your child. People will talk, some will mock you, others will shun you but do not let this dampen your spirit. Love your child, nurture your child, take them to school, take them to church. Give them a normal life. They are a gift from God”.

As we wind up the interview, Florence says her family is eternally grateful for the role MOHI has played in Harmony’s life. From taking him in and accommodating his needs and allowing him to stay in class, to the role MOHI staff played in helping her come to terms with the situation.

“God definitely had a purpose for setting up MOHI,” she says. “Because of people like teacher Jane and Isabella, my son has been able to fit in and feel that he is no different from his classmates. His self-esteem has grown and educationally, he is at par with his agemates. Truly, MOHI has been a blessing to me and my family and we pray for their continued success”. 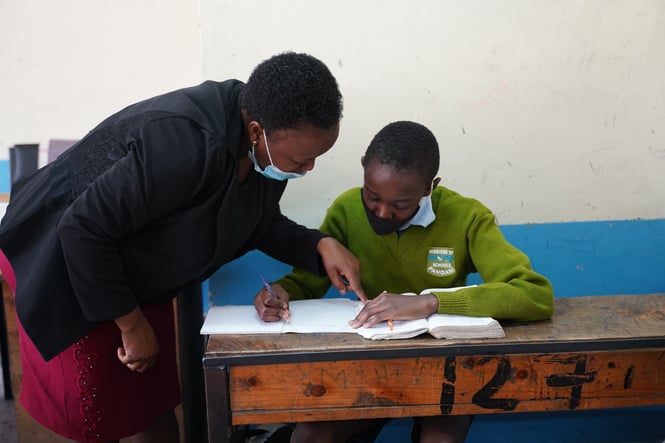